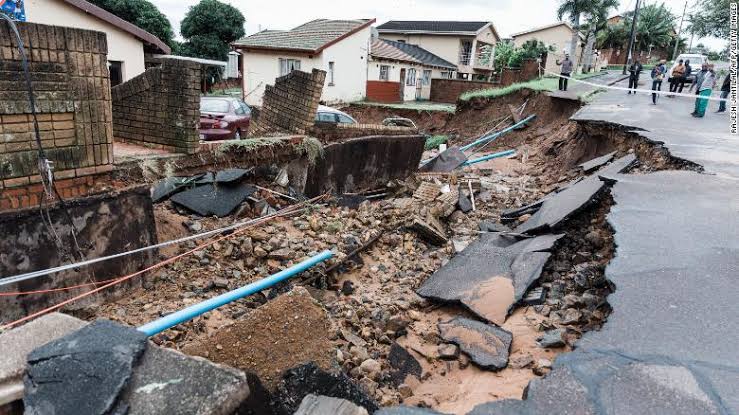 A rapid analysis published by the World Weather Attribution project has shown that human-induced climate change increased the extreme rainfall that triggered deadly floods in South Africa in April.

Recall that parts of South Africa experienced more than 350mm of rainfall which lasted for two days and caused destructive floods in KwaZulu-Natal and Eastern Cape provinces, killing at least 435 people and causing damage to property worth around $1.57 billion.

According to reports, the Port of Durban, Africa’s largest port, was forced to halt operations due to the floods, causing disruptions to supply chains.

Friederike Otto from the Grantham Institute at Imperial College London, who leads the World Weather Attribution (WWA) project, said that most people who died in the floods lived in informal settlements.

“So again we are seeing how climate change disproportionately impacts the most vulnerable people,” she said, adding that the flooding of the Port of Durban, where African minerals and crops are shipped worldwide, is also a reminder that there are no borders for climate impacts.

In coming up with the analysis, the scientists analyzed weather data and computer simulations to compare today’s climate, which is around 1.2 degrees Celsius warmer than temperatures before industrialization, with the climate of the past.

“Without human-caused global warming, such an event would only happen once every 40 years, so it has become about twice as common as a result of greenhouse gas emissions,” the (WWA) project said in a statement.

Reacting, WWA’s Izidine Pinto, from the Climate System Analysis Group at the University of Cape Town, said “If we do not reduce emissions and keep global temperatures below 1.5º C, many extreme weather events will become increasingly destructive,”. “We need to drastically reduce greenhouse gas emissions and adapt to a new reality where floods and heat waves are more intense and damaging.”

Scientists have severally warned that the world must try to cap global warming to 1.5C to stave off some irreversible impacts of climate change.

Report was adapted from CNN.