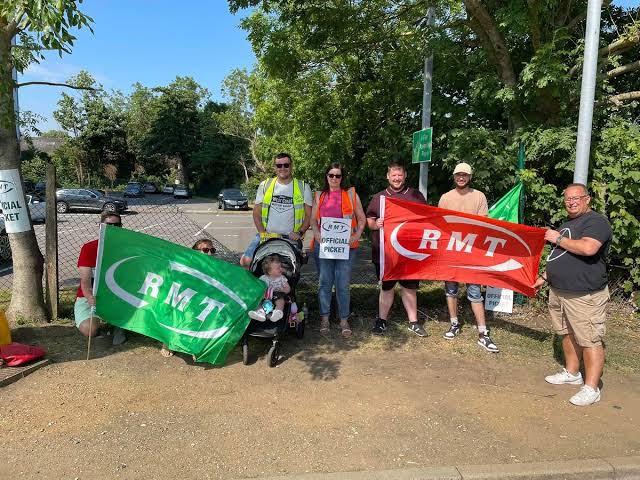 Climate justice groups are insisting that the British government must invest hugely in public transport to avoid the worst impacts of global heating.

The activists who joined striking workers on more than 40 picket lines in towns and cities, with more expected to turn out in the coming days, argue that well-funded, publicly owned, and affordable public transport will be essential to reduce the UK’s dependence on fossil fuels, moving people away from cars to more energy-efficient trains.

They insist that they warn the cuts and redundancies proposed by the government tonot only hit workers in the middle of a cost-of-living crisis but also weaken the rail network, locking in high carbon transport such as cars for decades to come.

Government figures show that transport is the UK’s largest source of emissions, responsible for 27% of greenhouse gases in 2019. Of this, 55% comes from cars and most of the remainder is from vans and lorries.

An organiser with Just Stop Oil, one of the scores of the group’s activists who have been on picket lines in the past few days, Bruce Murphy says that “You can’t separate the cost-of-living crisis and the climate crisis and I think more people are understanding that in both the green movement and the progressive labour movement,”.

Murphy, who was on a picket line in Manchester, said trade unions were Britain’s biggest social movement and that strikes were “a powerful tool of civil resistance for workers and communities being forced to pay for a crisis they didn’t cause”.

He added, “I’m proud to stand with trade unions because I know that together our collective power can take on the crisis we face in our cost of living, climate and our democracy”.

On his part, Asad Rehman, a leading climate justice campaigner and director at War on Want, said the root causes of the cost-of-living crisis and the climate crisis were “corporate profiteering that is pushing millions into poverty and rolling back hard-won rights that are critical to guaranteeing everyone a dignified life.

Reports show that as the second day of strike action started, climate activists joined rail workers at picket lines across the UK from Glasgow to Manchester, Preston to Brighton and Sheffield to Bath.