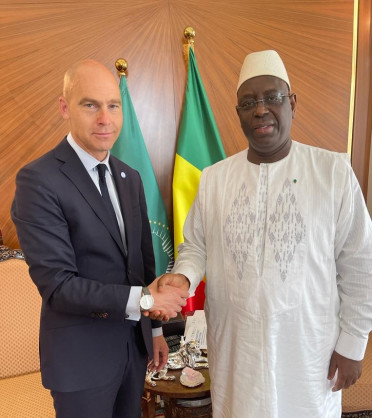 CEO of the Global Center on Adaptation, Patrick Verkooijen, has said that Senegal is on the frontline of the global climate challenge and will play a critical role in leading Africa’s response.

Verkooijen, who made this known in his remarks in Dakar, Senegal, after meeting President Macky Sall recently, said that he and Macky Sall had joined forces to unlock $1 billion in climate finance for Senegal under the Africa-led and Africa-owned Africa Adaptation Acceleration Programme (AAAP).

The AAAP which aligned with Senegal’s National Plan for an Emerging Senegal (PSE), puts youth empowerment for entrepreneurship and job creation at the centre of adaptation.

In his reaction, President Macky Sall said that “neglecting climate change is immensely short-sighted and that bold adaptation action remains the best strategy to address the root cause of other crises.

“As global food prices soar and shortages loom, the most urgent need is for funds that improve the ability of climate-vulnerable countries to feed themselves,” he said. “If ever there was a time to strengthen adaptation in Senegal and on the continent, it is now.”

According to reports, the high-level meeting in Dakar marked a relevant milestone ahead of the Africa Adaptation Finance Forum, which will be co-convened by President Macky Sall, CEO Patrick Verkooijen, and Africa Development Bank (AfDB) President, Akinwumi Adesina.

On September 5th, the Leaders Forum will hold in the Netherlands and is expected to bring African leaders and global partners together to fulfil the vision of the AAAP and the commitments made in Glasgow of doubling adaptation finance.