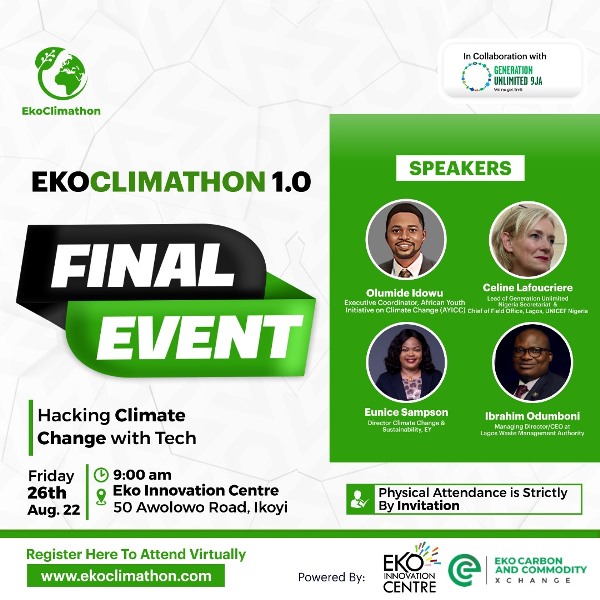 Three Nigerian technology startups have emerged winners from the EkoClimathon 1.0 challenge aimed at using technology to address the challenges of climate change in line with Nigeria’s long-term vision to reduce Green House Gases to net zero by 2050.

The challenge, which Eko Innovation Center hosted, gave tech startups across four continents an opportunity to compete in a climate hackathon challenge working to create lasting solutions towards actualising this goal.

Speaking at the grand finale of the hybrid event which was held in Lagos, convener of the hackathon and Chief Executive Officer, Eko Innovation Center, Mr Victor Afolabi said that apart from supporting startups with seed capital, the challenge primarily focused on creating real-time solutions to the problems of human society and making the ecosystem more liveable for the future.

“Out of 1034 entries we were able to get 300 teams who went through three weeks of workathon where they worked and created stuff after which they pitched to the selection jurors,” he said. After that, the jurors selected the best 10 teams from the initial 300 who went through the mentor’s nest where they were mentored. Their ideas were improved with several collaborations globally to make their products fit for purpose”.

While thanking all those who collaborated, Afolabi said that it is hoped that the initiative drive Nigeria’s economy from an extractive based to a more knowledge-driven and service-oriented economy that will cater to the needs of the people.