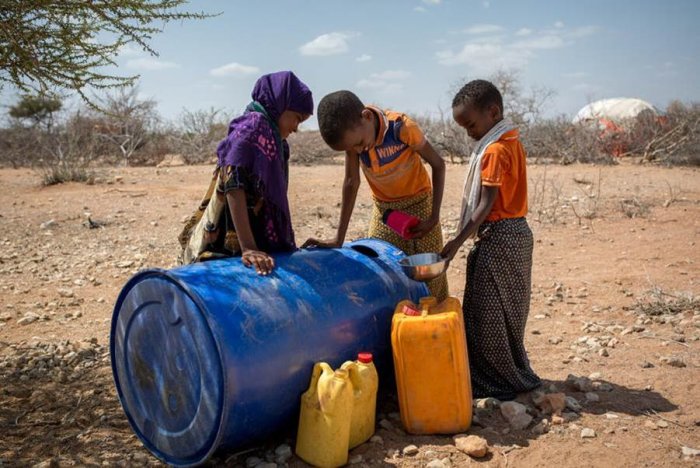 The United Nations has warned that at least 350,000 children in Somalia could die due to starvation and increasing drought worsened by climate change in the impoverished African nation.

The UN warned that over 1.4 million children under 5 years of age were severely malnourished and that the number could increase further unless the world rallied to provide food aid and fight the drought which had crippled the country for the past four years.

“If we don’t step up our intervention, it is projected that 350,000 of them will perish by the summer of this year and the situation cannot be direr than that,” Adam Abdelmoula of the United Nations Office for the Coordination of Humanitarian Affairs said.

“The UN boos called on all those who are able to contribute, including the Somali diaspora, the business community, the traditional and nontraditional donors, everyone, to act and to act now.

Reports show that three years of successive drought have left Somalia’s largest river, the Juba, almost entirely dry even as the lack of water has affected an estimated 4.5 million people, many of whom make their living as farmers.

Ahmad Hassan Yarrow, a Somali resident forced from his home in search of food and water, said that of all the droughts he has experienced in the last 70 years, he has not seen anything as severe as this.

Recall that the U.N. Intergovernmental Panel on Climate Change, In its recently released sixth assessment of the state of the world’s climate, warned that climate change and an ongoing La Niña — a climate pattern resulting in dryer weather for the Horn of Africa — were to blame for the drought and soaring temperatures baking the region.

In Somalia, a nation that has endured decades of political violence and extreme poverty, the effects of climate change are being acutely felt by children. More than 700,000 people are reported to have already been displaced due to the successive years of drought.

“Already in this country, 70% of school-age children are not attending school. In just one state in Juba land, the drought has led to the closure of 40 schools, and that is going to be the trend in many drought-affected areas,” Abdelmoula said.